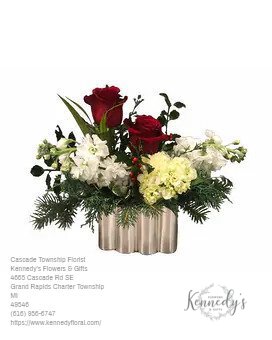 Kennedy's Flowers & Gifts is a florist in Cascade Township MI. Whether in tales of providence, tragedy, rebirth, and true love, flowers are an important part of storytelling all over the world, throughout different eras. These precious blooms enrich stories with their vigor and create striking images with their beauty.


Beyond providing embellishments, however, the flowers in these stories have influenced many cultural traditions and ways of life. The stories passed on from generation to generation impact the meanings we associate with different flowers, which we then use for different occasions: to celebrate, to commemorate, and to comfort.


The reason why they're so important is because the symbolisms of these flowers move, inspire, and teach us lessons in life.


Call Kennedy's Flowers & Gifts the flower delivery experts in Cascade Township, MI or surrounding areas today for your free estimate or if you have any questions, give us a call at (616) 956-6747

So if you're getting tired of using the same old bunch of flowers for your home, office, or events, we're right here to help! Our selection of trendy bouquets are sure to catch your eye and transform any space into an inspired new style. Old-school flower lovers may be a bit skeptical of dried flowers. But there's no doubting how trendy they are these days!


Their rustic and captivating look can make any bouquet stand out from the rest. There are even bouquets made up entirely of dried blooms!


These are perfect for anyone who wants a low-maintenance but impressive bouquet. Roses, pansies, sunflowers, and baby's breath make lovely dried blossoms.

At Kennedy's, we believe in fun living and creative giving. Come find out why we received the coveted national "Retail Florist of the Year" award from Florists' Review magazine.


Kennedy's is more than just a flower and gift shop, we're an experience waiting to be had! When you step inside, you're greeted with a delight to the senses. The smells, the sounds, the smiling faces...


The origins of giving flowers go back to the time of Ancient Egyptians, Greeks, and the Roman Empire. These three societies often used flowers in religious practices. They based their personal use of flowers on their beliefs.


The Greeks used them as props for plays. They also made them into decoration for ceremonies. Later, they began exchanging flowers to show affection towards one another.


Societies throughout history have continued the practice of gifting flowers. During the Middle Ages, people from Turkey put together the first list of symbolisms for flowers.


This later spread throughout the world. Other cultures fine-tuned these to their traditions and beliefs.

Are you in the Cascade Township, Michigan area and are looking for a business that does flower delivery near me? Are you interested in having fresh flowers delivered? If the answer is yes, you have found a great resource to take care of all your florist needs. We are the best florist in Cascade Township, Michigan. No arrangement is too big or too small for us. We provide full-service floristry services.

People from the Victorian Era are often known for being at the apex of fanciness.


But did you know they used flowers to convey deep, unsaid feelings towards each other?


Back then, people were getting more into gardening and flower care. They sought to grow robust, beautiful flowers. They also raised new flower species.


The flowers, in turn, served as a form of communication. It carried messages between lovers, friends, families, and even acquaintances.


Flowers conveyed sentiments ranging from "I love you", to "I treasure you, my friend", to "I'm sorry". They played a key role in how Victorian-era citizens made their feelings known.


See, Victorian people thought that saying how you feel was tacky. So they adapted the list of flower meanings back in the Middle Ages. Then, they executed these into how they interacted with each other.


This even encompassed romances! Courting was usually carried out through exchanges of flowers.


Some groups even developed alternate meanings to flowers. They did this to communicate in secret, hidden from prying eyes.


Not long after, most individuals knew what every flower and floral arrangement meant. They could hold an entire conversation without saying a word.


The practice of flower giving became quite popular. Soon enough, people began using bouquets to send particular messages to people. Even the way that the person presented the floral gift became part of their message. This tradition carried on (of course with less melodramatic quality) through history.